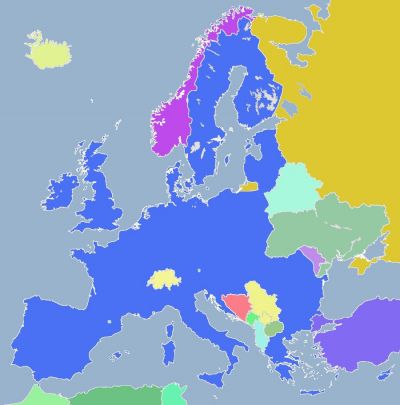 UE
The European Union of 28 countries stretches over the continent of Europe from Lapland in the north to the Mediterranean Sea, and from the west coast of Ireland to the shores of Cyprus: a rich tapestry of landscapes from rocky coastlines to sandy beaches, from fertile pastureland to arid plains, from lakes and forests to arctic tundra.

The peoples of Europe with their diverse traditions, cultures and languages make up over 7 % of the world’s population. Their historic heritage is charted in prehistoric cave paintings, Greek and Roman antiquities, Moorish architecture, medieval fortresses, Renaissance palaces and baroque churches. The modern Europe too attracts the traveller with its vibrant cities, colourful cultural festivities, winter and summer sports, and varied cuisine.

Europeans love to travel and the removal of most passport and baggage formalities has made travelling much easier. Eighteen EU countries share the same currency, the euro, which makes price comparisons easy and removes the cost and inconvenience of changing money. The creation of a single market of more than 500 million people has brought wider choice and lower prices. In fact most Europeans find it as easy to travel within the EU as to travel within their home country.