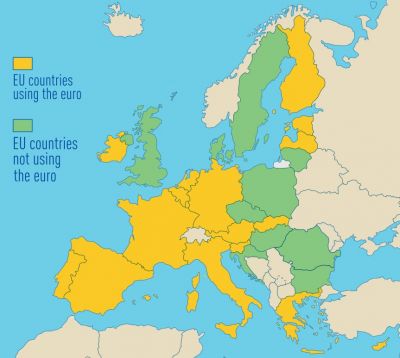 Euro
The euro is currently used by more than 60 % of EU citizens or more than 334 million people in 18 EU countries.

The symbol of the euro is €. Euro notes are identical in all countries but each country issues its own coins with one common side and one side displaying a distinctive national design. All the notes and coins can be used in all EU countries that have adopted the euro, including many of their overseas territories.

In European countries outside the euro area, many hotels, shops and restaurants, particularly in tourist areas, accept payment in euros as well as the national currency, although they are not legally obliged to do so.


Withdrawing euros from a cash machine anywhere in the EU costs you the same as it does in your own country from a cash machine that does not belong to your bank. The same fees must apply to all payments by debit or credit cards in euros no matter whether the transaction takes place in your own country or within the EU. The same fees must also apply when making a euro credit transfer or direct debit payment whether you send a payment nationally or to another EU country. Charges for any transactions may of course differ significantly between banks. International payments in other currencies are not subject to these provisions.

If you enter or leave the EU with €10 000 or more in cash (or its equivalent in other currencies) you must declare it to the customs authorities.